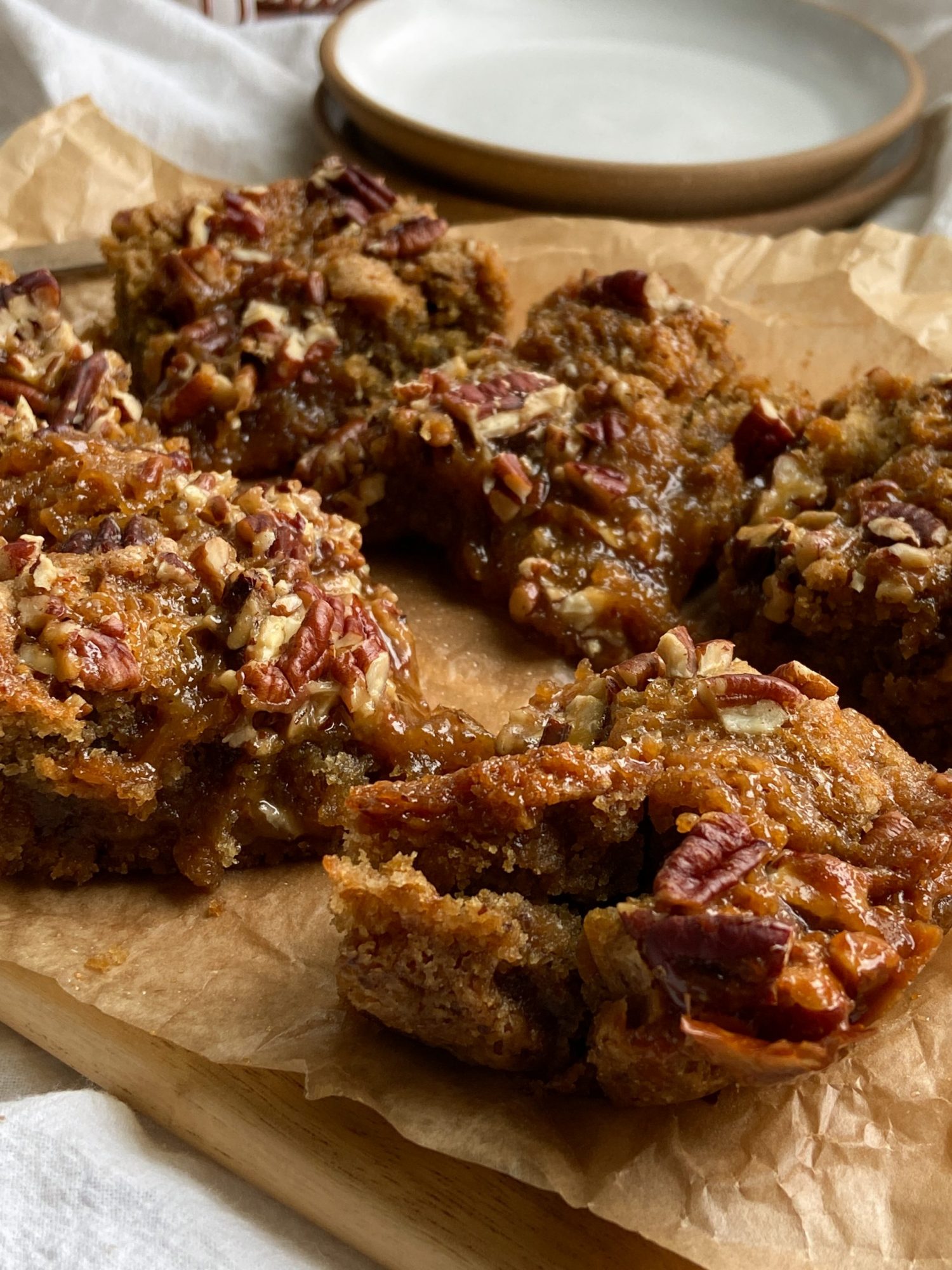 These Vegan Blondies with Caramel and Pecans are quick, easy, and simple. Dairy-free and egg-free, they’re loaded with caramel pieces and pecans for an ooey-gooey dessert ready in just 25 minutes! Serve them on their own or with a scoop of ice cream.

Are you guys caramel fans? If you’ve been around a while, you probably already know that I love it! I mean, it’s basically just a combination of different sugars. So, what’s not to love? Plus, I’m not sure there’s anything it doesn’t go well with. From Vegan Caramel Apple Scones, to Chocolate Covered Caramel Pretzel Bars, and Chocolate PB Caramel Collagen Cookies, and more, it makes every recipe better!  So, I figured why not try it out in one of my all-time favorite desserts and added caramel and pecans to my favorite vegan brownies!

You guys, the results were incredible. Like, drop whatever you’re doing right this instant, and run to your kitchen to make them good. I’m not kidding! Not only did these caramel blondies come together in less than 30 minutes, but there were also super easy to make, required minimal cleanup, and can be enjoyed throughout the week (If they last that long). I mean, I hit the recipe jackpot here! So, naturally, I had to share. After all, I don’t want to be rude. If you’re ready to make out-of-this-world good vegan blondies for yourself, keep reading to find everything you’ll need below!

What’s the Difference Between Brownies and Blondies?

First things first, let’s clear up some confusion! While similar, brownies and blondies are not the same dessert!

Brownies: Desserts made with 5 basic ingredients including chocolate, butter, flour, granulated sugar, and eggs. They can be made with a variety of different ingredients and variations, but the 5 staples don’t typically change, especially the inclusion of chocolate.

Blondies: Sometimes referred to as blonde brownies, blondies are made without the use of cocoa and include brown sugar and brown butter instead of granulated sugar and regular butter.

As a result of their different ingredients, brownies have a rich chocolate taste while blondies taste slightly lighter, sweeter, and have distinct notes of caramel and butterscotch.

As previously mentioned, blondies have a sweet taste, often marked by flavors of caramel or butterscotch. They have the soft, gooey texture of a brownie with a taste like that of vanilla cake. These caramel blondies are elevated even further with the inclusion of caramel and salty pecans!

How to Make Vegan Blondies

This recipe uses similar ingredients to traditional blondie recipes with a few simple swaps to make it dairy-free and vegan!

Flaxseed – Flaxseed is used to replace the egg in traditional blondies, but it must be combined with water to create a “flax egg”.

Butter – If you aren’t following a vegan diet, feel free to use traditional butter. Otherwise, any vegan butter you have on hand will work.

Brown Sugar – Whatever you do, don’t swap out brown sugar for regular sugar! It is not the same. Been there, done that, do yourself a favor, and just trust me on this one. If you want to use ¼ cup of brown sugar you can, but be aware that your caramel blondies will be way less sweet and won’t have the classic gooey texture we look for in a  blondie.

Caramel – I used 12 Cocomels sea salt caramels, but you can use whatever you like best, and feel free to measure them with your heart.

Pecans – For quick baking, I recommend buying pre-chopped pecans, but you could also purchase them whole and chop them yourself! The point is, we want little pieces.

In my house, caramel blondies don’t last long. However, if you make them ahead of time, you’ve got several storage options!

Refrigerator: Place any leftovers in the fridge for up to 1 week.

Freezer: For a longer-lasting option, place leftover blondies in an airtight container in the freezer for up to 3 months!

Should my blondies be cakey?

If your blondies turn out cakey, it’s likely because you overcooked them. Unlike brownies, you do not want cakey blondies! They’re meant to be gooey. That’s why it’s crucial you remove them from the oven after 25 minutes.

How can I prevent my blondies from sinking in the middle?

If your blondies begin to sink after you pull them from the oven, it’s because you overmixed the batter. This adds air to the mixture, causing the blondies to rise in the heat of the oven only to collapse as they cool. So, as soon as you see the ingredients have been combined, stop mixing!

How can I tell when vegan blondies are done baking?

The easiest way to tell your blondies are done baking is just to follow my instructions. Kidding! Jokes aside, blondies are meant to turn slightly golden on the edges while maintaining a gooey center. Definitely don’t bake them longer than 25 minutes, even if the edges don’t look crispy.

That’s it you, guys! I hope you love these vegan blondies as much as I do! If you try them out, I would love it if you let me know in the comments below!

These Vegan Blondies with Caramel and Pecans are quick, easy, and simple. Dairy-free and egg-free, they’re loaded with caramel pieces and pecans for an ooey-gooey dessert ready in just 25 minutes! Serve them on their own or with a scoop of ice cream.

Processing…
Success! You're on the list.
Whoops! There was an error and we couldn't process your subscription. Please reload the page and try again.
Scroll to top