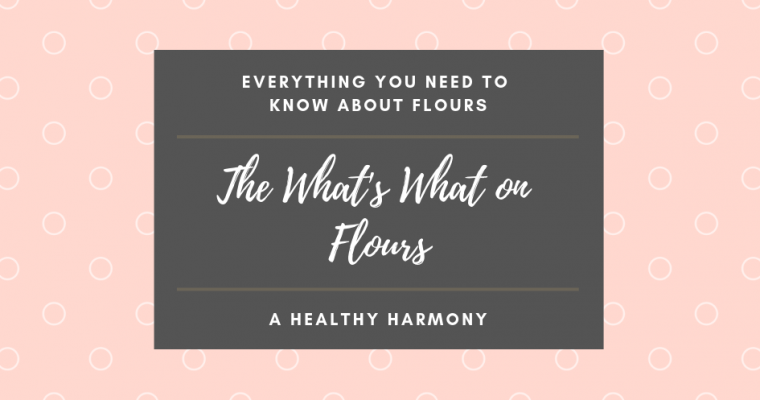 There are SO many flours out on the market giving us an incredible amount of options but holy overwhelm! I remember when I first started trying to eat a more nutritious diet… the number of flours completely overwhelmed me. Even if I wasn’t new to the idea of using more adventurous flours- I feel like there are so many ‘you should use’ opinions that it can be confusing AF. Don’t worry friends! I’m going to give you all the info on ALL the flours- not just the “healthy” ones.

CHICKPEA – Let’s just start with my favorite flour shall we? Chickpea flour is made from dry chickpeas and is also known as garbanzo flour, gram flour, and besan. As it is a legume, chickpea flour is chock-full of fiber, protein, magnesium, and potassium. This flour is my favorite because it acts just like All-Purpose Flour. It rises beautifully, light and airy. The only downside is that while other flours may be tasteless (or nearly) this flour does have a nutty flavor to it.

ALMOND – This one is probably one of the most commonly used gluten-free options. Made completely from almond, this flour is lower in carbs + moderate carbs + moderate protein. It is full of minerals and vitamins including magnesium, potassium, iron, calcium, copper and more. It can typically be substituted in a 1:1 ratio in place of regular or wheat flour but you will need to use a more liquid and it will produce a denser baked good. Instead of adding more liquid, using an added egg has produced great success as well. I personally have had an issue with this flour rising as well as wheat flours so keep that in mind when using it!

COCONUT – This flour is unique in own! It is made from coconut meat meaning it yields a mild coconut flavor. Coconut flour is extremely absorbent so it can’t be replaced in a 1:1 ratio like almond flours can be , coconut flour is a good option for those with food allergies as it is technically not a nut. Coconut flour is used in a lot of recipes since it is high fat and very low carb.

CASSAVA – I’ll admit I’m not as familiar with this flour as I should be since I have loved recipes that use it. From what I can tell, Cassava flour is the closest flour resembling all-purpose since it has a neutral flavor and is practically all carbs. Cassava comes from a root found in South as the yuca root. Both cassava flour and tapioca flour(starch) are made from the same root but cassava is made by and drying the whole root while tapioca is made from the starchy liquid extracted from the root.

TAPIOCA – Tapioca flour, also known as starch, is (in my opinion) not really a flour at all. It mostly resembles corn starch and can be used as a great replacement to thicken soups, sauces, jams and works well pastries.

GLUTEN-FREE BLENDS – There are so many gluten-free baking blends on the market that I thought they deserved their own section. Unfortunately, not all baking blends are created equal! Typically, they have some sort of starch (tapioca, arrowroot) with two other flours to create a similar texture of gluten filled baking. I have used many different brands and can tell you none of them have produced great results. If you are interested in using blends, just be aware that they can be fickle and a lot of the time- over priced!

SORGHUM – flour is actually created from an ancient grain that some consider the fifth most important grain in the world! nutritional makeup is impressive as it’s full of the usual suspects being protein and fiber but it also contains antioxidants that help with inflammation. Sorghum can be found in gluten-free baking blends and is a denser flour. Aka it is usually blended with something else that has lighter rising es.

AMARANTH – Amaranth flour is typically found in gluten-free baking blends as it can’t replace wheat flour on a 1:1 ratio. It has a slightly nutty flavor but easily takes on the other flavors that are baked with it. Nutritionally, amaranth packs a punch! It is high in protein, fiber and more than a handful of micronutrients that support brain and bone health.

ARROWROOT – There is not much to be said about this flour as it’s really more of a starch. It can be used on it’s one for a crunchy breading or can be found in gluten-free baking. I’ve also had success with using arrowroot in replacement for cornstarch. Arrowroot is chalk full of potassium, vitamin B and iron.

BUCKWHEAT – Buckwheat is deceiving because while wheat is in its title, it contains no wheat at all. Buckwheat is actually considered a pseudocereal…. a really fancy word for saying it’s a cereal grain. (Just like Sorghum!) Buckwheat is great for making baked goods that contain yeast but it is also known for having more flakey properties which makes it a great candidate for gluten-free baking blends. Buckwheat has a long history in the health industry because it’s known for having B vitamins, iron, folate, magnesium, zinc, manganese and tons of fiber. It is also known for it’s antiinflammatory properties.

CORN– cornmeal but ground finer, corn flour is a gluten-free option that is probably the least commonly used. Many people have opinions on non GMO corn contaminating conventional corn so I’ll let you make up your own mind on the subject. I’ll just point out, corn bread is pretty dang good.

TIGERNUT – This is a newer flour on the market and despite its name, it isn’t really a nut at all. Tigernut flour comes from a root and has a slightly sweet and nutty flavor which makes it perfect for sweet baked goods! It’s often used in paleo baking because, in a lot of cases, a sweetener isn’t needed when using this flour. Tigernut is also known for its high fiber content, in 1/4th a cup- there’s 10 g of fiber (which is known to lower cholesterol) and is a great -free option.

OAT – Oat flour is simply ground oats! You can easily make your own for a fraction of the cost by processing the oats high-speed blender or food processor until the oats are a fine powder. Oat flour is a great flour in general but it can be iffy for gluten-free use. Gluten contamination is high with oats and unless you are going to ground your own gluten-free oats, it’s something that you should consider. Nutritionally, oat flour is high in fiber which is known for lowering plus oats are loaded with protein, magnesium, phosphorus, B-vitamins amoungst other things!

WHOLE WHEAT – Made from whole wheat grain, whole wheat flour (not to be confused with refined wheat) provides fiber, vitamins, and minerals including manganese, copper, and folate (a B vitamin). Whole wheat is predominately made up of insoluble fiber ( goes through your digestive tract intact) and very little soluble fiber. For some people that have irritable bowel or digestive issues, the soluble fiber can trigger inflammation.

ALL-PURPOSE – All-purpose flour is a blend of high-gluten hard wheat and low-gluten soft wheat. Unlike brown rice and whole wheat flour, all-purpose flour is milled with only endosperm— not bran or germ. Aka all-purpose is NOT whole grain. Most of the nutrition is stripped during the milling process but it does create a light and fluffy texture when baked. As it has no flavor, it takes on the flavor of whatever you’re baking with.

Phew- are you still with me? I listed 16 different types of flours but that really only covers the tip of the iceberg. I didn’t want to overwhelm you with information and I think these flours are a great place to start.

Now, if paying for a yearly membership isn’t your thing or Costco is just too far away… most grocery stores have bulk bins which you can fill up your own containers to bring home for a lesser price. It won’t be nearly as great of a deal but it will be way better than nothing! Generally, there are cheaper stores than others that you’ll want to consider first before going flour crazy. Walmart, Trader Joes, Fred Meyer (if you’re local), and Aldi are always going cheaper than places like Whole Foods or The Fresh Market.

Next up, I would say to consider buying online. Linked in this post are flours that are reasonably priced. A five-pound bag of almond flour from a reputable seller will run you $30 dollars which is still a great deal!

I caution you not to get fooled by popular sites like Thrive Market. While they have great deals on some items, a lot of the things there are still overpriced PLUS you have to pay a membership fee. My motto? A deal isn’t a deal just because it’s on sale.

Alright , that’s it! I really hope this read was helpful 🙂 If you liked it, make sure to reach out and let me know!

There may be affiliate links in this post! By purchasing a product I recommend, I may receive a small compensation. Remember peeps- I’m real AF and would only recommend products I absolutely love and use myself. Thank you for supporting me in my realness- you make my LIFE!