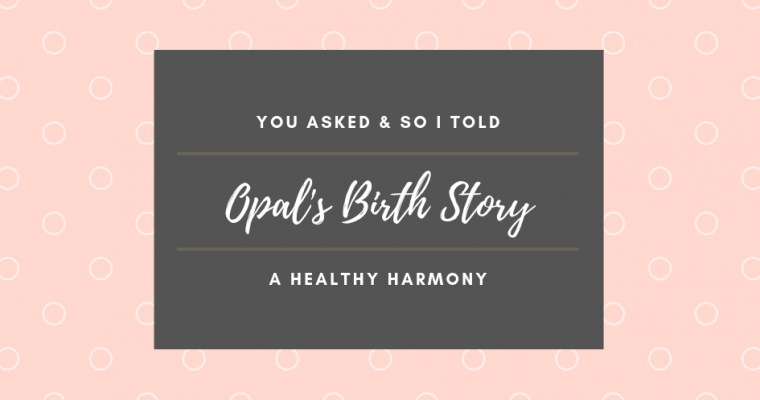 On the early morning Sunday July 28th I woke up to some inconsistent contractions that kept me stirring but managed to go back to sleep after a few hours. By the time 8am rolled around, any sign of labor had long gone. I was convinced she’s come another day so I went on with my day like everything was normal. I enjoyed having coffee with my mom, watering the garden, feeling the sun on my face and eating breakfast. I took a walk with Cody while my mom and sister took my kids to give us time to “just be”. By noon I wanted to lay down to rest but by 1 my contractions were back with vengeance. I was able to talk through most of them but by 2:30 I knew we needed to head to our midwifery…. considering it was an hour away, I wasn’t down to have a car baby.

Once we got to the midwifery my midwife checked me and I was dilated to 5 cm. My contractions were still pretty inconsistent (not abnormal for me, E’s never were) and by 4:30 I asked her to check me again. I had only dilated to a 6 (which full disclosure, I was pretty bummed about) so I asked them to break my water to see if it would kick my body into gear. By 5 I was begging Cody to make the pain stop. I’m pretty sure I even told him I decided I didn’t want to have a baby anymore. There was no grace in this whole situation. If there was a trophy for having a baby I would have gladly handed it off and closed up shop. I was in pain. I wanted to be done. Even more so, I scared I wouldn’t have enough strength left in me to birth Opal if my labor continued to progress slowly. My midwife overheard me tell Cody I couldn’t do it anymore and walked in with a calmness I was clearly lacking and simply said “tough luck, it’s time to push”.

My midwife had more faith in my body than I did because I looked at her with equal parts hope and annoyance. How dare she get my hopes up that the pain would end shorty?! She was right though, within 20 minutes I went from 6 cm to fully dilated. It was indeed time to push! The realization made my mind plead with me to run for the hills. My body was ready but my mind clearly was not. I’ve done this rodeo before- the pushing brings just as much pain as the contractions- something my mind was so was kindly reminding me of.

While I was being shuffled closer to the bed- my midwife, the doula and nurse kept asking me what position I would like to push in but no actual words were able to escape my mouth. I somehow managed to get in all fours but it took one contraction to realize the bucking bronco look was not a great look for me. I turned over onto my side in time for another contraction to hit. It came along with my instincts to push and a ring of fire that I’m 1000% positive has scarred me for life. I tried to muster calmness but I’m pretty sure I sounded like a banshee shrieking at my midwife that it hurt (duh, Kelly… you’re in freaking labor). I batted at my midwife’s hand to get away from me to which she responded “lean into the fear Kelly”. That was all I needed to hear- the third contraction came and leaned into it with all that I had. Cody told me her could see her eyes and was relentless with encouragement. Apparently I wasn’t pushing fast enough because Opal started screaming with her mouth still in the birth canal. Everyone thought that was hilarious… everyone but me as it was my birth canal that she was still in.

One more contraction and Opal was free. My midwife instantly placed her on Cody’s chest. I wasn’t the type to wish her birth to go an exact way, as long as she arrived in as little distress as possible, that was all that mattered but having Cody hold her first was something I was vocal about months before she was born. I knew I was going to need time to for me- to breath, regroup and allow my adrenaline to simmer the eff down. While I was taking a moment, my midwife was telling my I birthed her with no tares but all I could think about was Cody. I saw another side of him that I had never seen before and honestly doubted he was capable of. He never gave up on me. Always being the voice I needed to hear even though that voice needed to change constantly. He was showed me MY strength when I was too tired seek it out. Seeing him then look at the little baby in his arms, I could almost feel his heart exploding with pride. After nine months of waiting, he finally got to hold his little girl.

What seemed like 30 minutes was no more than two before Cody laid down next to me and set Opal on my chest. I hadn’t birthed her placenta so she couldn’t yet reach my breasts but once I did, she latched on instantly and began to nurse. My amazing birthing team cleaned me up as much as possible before moving me onto a different part of the bed and quickly let us be. We were in a our own little world until they discharged us four hours later.

I honestly didn’t know what to expect going into this labor and I would be lying if I didn’t say that at first I was slightly disappointed in how I handled things. After a few weeks of relieving her birth in my head, I’m proud that I was just able to get her here. She’s here – happy and healthy- that’s really all that matters.

If you’ve made it this far, props to you!! Her birth wasn’t anything out of the ordinary but it was one I will always remember.