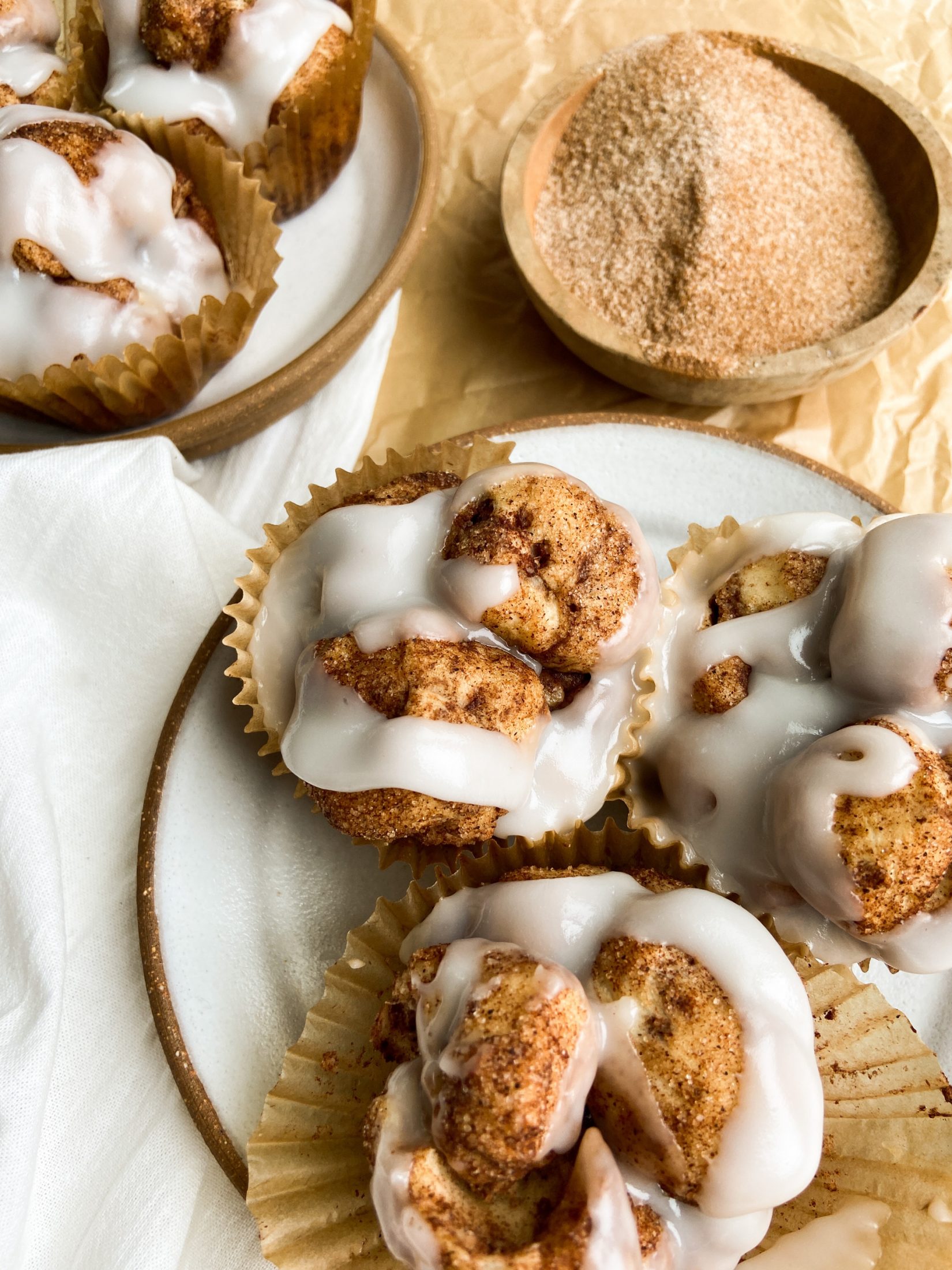 Made with simple ingredients, these Monkey Bread Muffins are a fun twist on a traditional recipe. No-bundt pan required and ready in minutes, they’re perfect for a sweet breakfast, quick snacks, or a tasty dessert!

Is there anything better than the combination of cinnamon and sugar? That was a trick question. The answer is obviously no! Plus, when paired with the warm comfort of bread. Oh my gosh, you guys, I can’t. I’m drooling just thinking about it.

I don’t know about you, but one of my favorite cinnamon sugar treats as a kid was always monkey bread. Let’s be honest, it’s still one of my favorites as an adult. You just can’t beat it! With recipes like my Air Fryer Monkey Bread, Cinnamon Roll Churro Bites, and Cinnamon Roll Bread, I’ve clearly tried my hand at the whole cinnamon sugar thing, and let me tell you. It never disappoints!

So, when a craving for sweet monkey bread hit once again, I decided to get creative in the kitchen in an attempt to make this recipe as simple as possible. The result? Even better than you would expect and ready in no time! Seriously, made with 4 ingredients, these Monkey Bread Muffins are super fast and completely irresistible.

But, that’s enough of me talking. What are you waiting for?! Let’s get baking!

What is Monkey Bread, Anyway?

A common breakfast or treat in the United States, monkey bread is a soft, sweet, and sticky bread traditionally made by baking small balls of yeast dough in a pan (typically a bundt pan) with a sweet sauce poured over top with a sprinkling of cinnamon. The exact origins of the dish are largely unclear, but it is believed to have been popularized in California in the 1940s. The funny name is believed to be a result of the dessert’s appearance. For more information, take a look at this article!

This recipe is so simple, it’s likely you already have everything you need waiting for you in your kitchen! However, I do have a few alternative suggestions for you to get the most out of this monkey bread experience. So, keep reading to find the best items for your specific needs and taste buds.

Dough – Obviously, you need something to form the bread, but you have several options here. For instance, both cinnamon rolls or biscuits work amazingly. Personally, I prefer to use Anne’s Homegrown cinnamon rolls. However, if you want to be an overachiever and make your own, more power to you. To help you out, I actually have a recipe on this Instagram post that can easily be used. Just be warned, I would cut the recipe in half or double the sugar and cinnamon mixture in order to make more muffins!

*This recipe is Vegan. So, just make sure any dough you use is Vegan-friendly as well.

Butter – I used Vegan butter. If you prefer, it can easily be swapped out for regular dairy butter or coconut oil, but I do not recommend using olive oil as it’s flavor will overpower the rest of the ingredients.

Sugar – To keep things a little lighter, because, let’s be honest, this recipe has enough going on, I opted for Lakanto (code: kellyk). Any granulated sugar you have on hand will do, but do not swap it out for a liquid version!

Cinnamon – This recipe calls for 1 11/2 teaspoons of cinnamon, but feel free to measure that with your heart. Just don’t get too crazy!

How to make this Monkey Bread Muffins Recipe

The key to making this recipe work is remembering to line your muffin tin, not that I’m speaking from experience or anything. Just trust me, okay!

So, once you preheat your oven to 350 degrees Fahrenheit and lined your muffin tins, start by grabbing two small bowls. In the first bowl, melt your butter of choice. In the other, combine the sugar and cinnamon.

Then, open up your preferred dough, and cut each roll into 4 pieces. Roll each piece in the melted butter, and immediately dip it into the cinnamon and sugar mixture. Add the ball to one of the muffin tins, and repeat these steps stacking the pieces on top of each other until all of the muffins tins are full and the dough is gone.

To finish, bake your monkey bread muffins for 12 minutes. You can either eat them as they are, or drizzle them with coconut butter or a sugar glaze! They’re great served warm or at room temperature.

Also, if you want to make the sugar glaze, simply whisk together ½ cup of powdered sugar with 2-3 teaspoons of your favorite plant-based milk.

*In order to level out the sugar-high this recipe might cause by increasing the protein content, I recommend creating a glaze using yogurt and protein. Again, to keep this recipe Vegan-friendly, I prefer dairy-free yogurts, but any you have on hand will do just fine. I suggest opting for Greek if you have it! Then, just mix it with a dash of protein. Not too much, though! You don’t want to make the yogurt clumpy. My go-to protein powder is always Nuzest (code: thekellykathleen) in vanilla, but chocolate could be delicious as well!

If left in an airtight container, these muffins will last about a day at room temperature. If you wish to extend their lifespan, just pop them in the fridge for up to a week! Or, make sure to wrap them individually, and place them in the freezer for up to 3 months.

No matter what you do, just be sure to remove the muffin liners as they can stick to the muffins and are extremely difficult to remove!

Have you tried monkey bread before? Let me know in the comments below, and while you’re down there go ahead and comment on your favorite muffin flavor, too!

Made with simple ingredients, these Monkey Bread Muffins are a fun twist on a traditional recipe. No-bundt pan required and ready in minutes, they’re perfect for a sweet breakfast, quick snacks, or a tasty dessert!