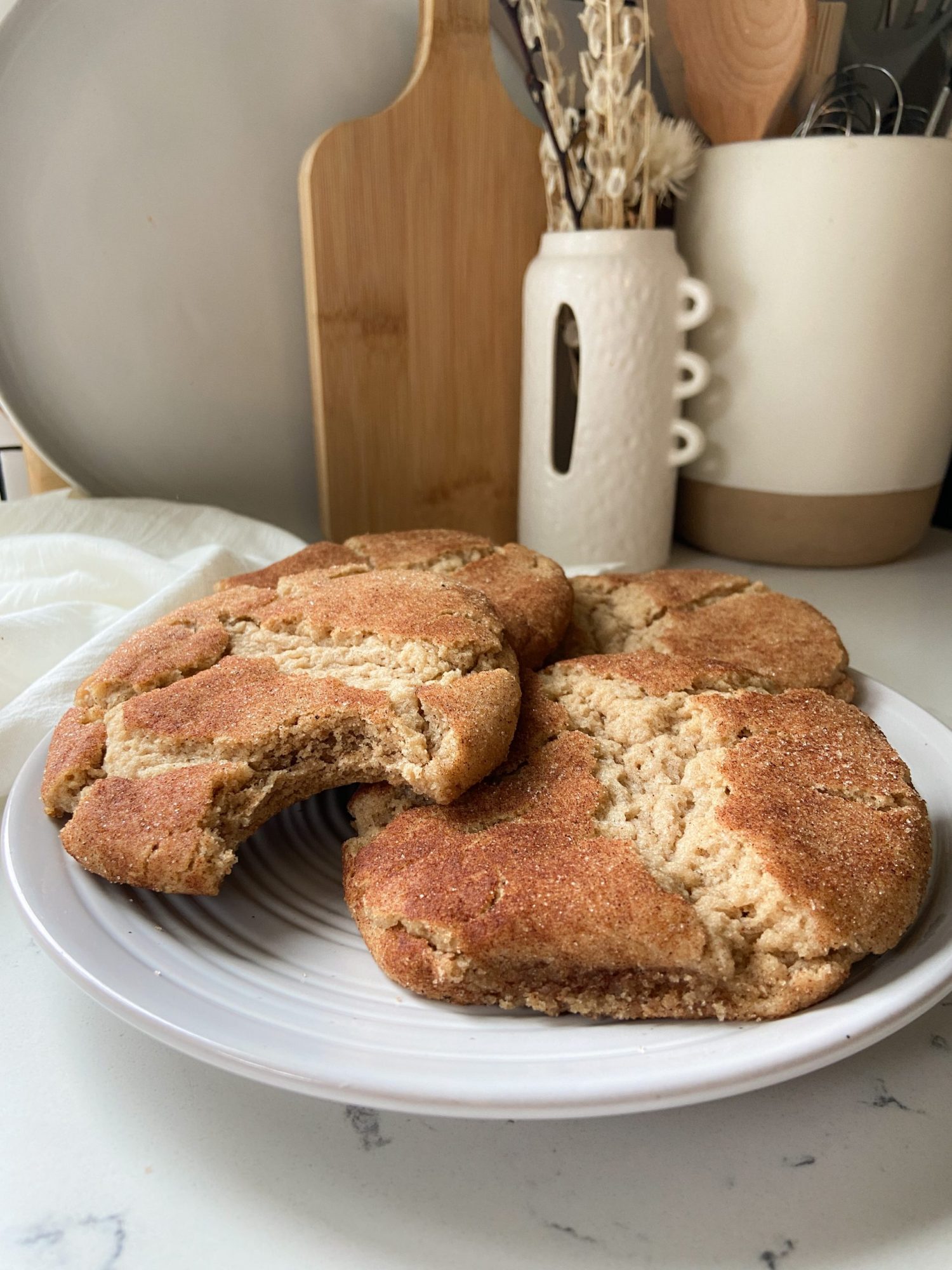 A seemingly made-up name, legend has it that the term snickerdoodle was actually based on the German pastry known as Schneckennudel. When translated, it means snail noodle and is more similar to a cinnamon roll than a cookie. Weird, right?

However, the name made more sense once I learned that snickerdoodle cookies didn’t actually start out as cookies at all! Instead, they began their journey of creation as a coffee cake known as a snipdoodle. Given its name by the Dutch and German immigrants in Pennsylvania, the dessert started out as a cake baked into a large pan. Then, it was sliced into bars and topped with a cinnamon sugar mixture. Somewhere along the line, the recipe developed into the snickerdoodles we all know and love today. Given that it’s one of my faves, you’ll find no complaints from me!

If you’re interested, read more about the history here. Then, scroll down to find the vegan snickerdoodles recipe of your dreams!

Snickerdoodle cookies contain many of the same ingredients as sugar cookies such as sugar, flour, and butter. However, the key difference between the two is the cream of tartar found in traditional snickerdoodles. It’s the secret ingredient that transforms the dough, creating the tangy flavor and chewy texture we love.

While the ingredients for these cookies are simple, there are a few things to note.

Lemon Juice or Apple Cider Vinegar – It might sound odd, but just trust me, okay? When combined with the baking soda, it creates the softest cookies you’ll ever taste.

All-Purpose Flour – If you need a gluten-free option, you should be able to use gluten-free all-purpose flour in its place. However, I haven’t tested it yet. So, I can’t absolutely guarantee your results.

Granulated Sugar and Ground Cinnamon – This mixture literally has me drooling just thinking about it! Used in addition to the cinnamon and sugar included in the dough, it makes these vegan snickerdoodles absolutely to-die-for delicious.

How to Make an Easy Vegan Snickerdoodles Recipe

Okay, I know that snickerdoodles are typically thought of as holiday food. However, this recipe is so simple to make, that it feels like a shame to stuff it away for eight months out of the year. So, go ahead and bake a batch in June. You deserve it.

Honestly, who’s not a fan of cookie dough? It’s perfect to make ahead of time for warm cookies whenever the craving strikes. Plus, this recipe is vegan so that means it’s safe to eat raw. Do with that information what you will.

However, once made the dough can be kept in the fridge for up to 3 days. Or, freeze it for up to 2 months. If you want to freeze it, I recommend rolling the balls of dough first. Then, place them in the freezer for a couple of hours until hard and transfer them to an airtight container or sealable bag.

When you’re ready to bake, you don’t even have to thaw the dough! Just add an extra few minutes to the cooking time, and your snickerdoodles will be good to go.

Of course, if you want to go ahead and bake your cookies, you can totally do that, too!

Room Temperature: Stored in an airtight container, they’ll stay fresh on the counter for up to 3 days.

Refrigerator: They’ll keep for up to 10 days!

Freezer: The longest-lasting option, baked vegan snickerdoodles can be frozen for up to 2 months. Just be sure to thaw them before eating!

The BEST and fluffiest vegan snickerdoodles ever, this recipe is soft, fluffy, and oh so easy to make!

Processing…
Success! You're on the list.
Whoops! There was an error and we couldn't process your subscription. Please reload the page and try again.
Scroll to top