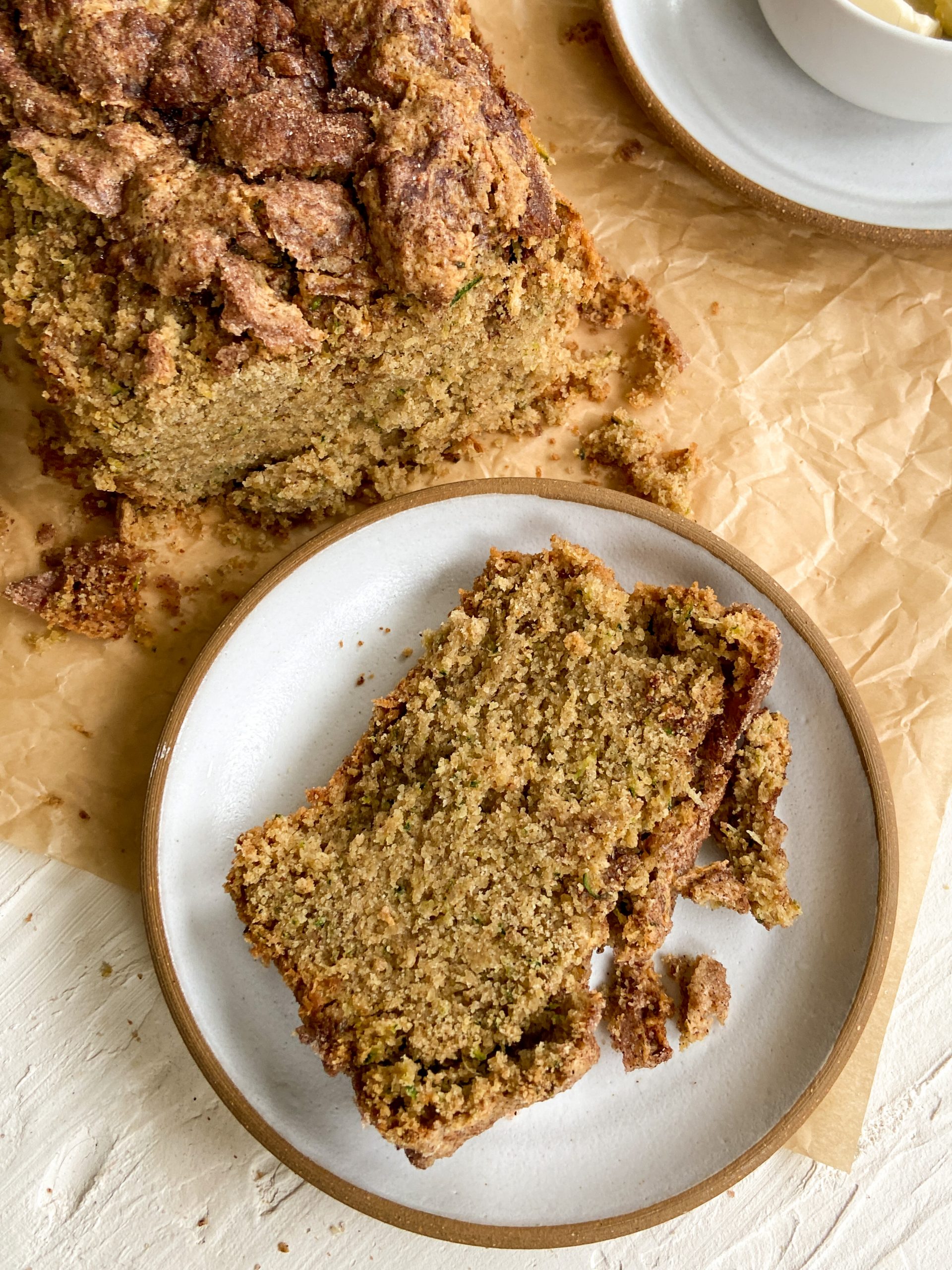 Made with simple ingredients, this Cinnamon Sugar Zucchini Bread is gluten-free, vegan, and delicious for a recipe the whole family will love! Make it ahead of time for easy breakfasts or a veggie-filled snack!

Is it just me, or do you guys have tons of zucchini laying around, too? With the end of summer coming, it seems like they’re everywhere! Not that I’m complaining, though. With recipes like Coconut Zucchini Cupcakes with Cream Cheese Frosting, Chocolate Chip Zucchini Blondies, and Vegan Cinnamon Streusel Zucchini Mini Loaves, I’m always prepared for an abundance! Not to mention, they make a great savory side dish to any of your favorite main courses.

While those recipes are great, and you should definitely try them, I wanted to do something a little different. Dreaming of fall, I found myself craving something warm and comforting, but I couldn’t quite figure out what. Then, it hit me! Bread! Duh. I mean, what’s better than a warm homemade bread loaf? Especially when it’s filled with veggies like this Cinnamon Sugar Zucchini Bread! Naturally, I jumped in the kitchen and got to work.

However, I didn’t want to do any old zucchini bread recipe. Been there, done that. Instead, I wanted to switch things up a bit. So, after a bit of brainstorming, I decided on making this classic recipe vegan. Then, I took it one step further and added cinnamon and sugar for a deliciously sweet bread guaranteed to satisfy all your cravings! ..At least until pumpkin season arrives.

So, ready to get baking? Let’s go!

In order to make this recipe vegan, I had to make a few swaps from the original. However, I did my best to keep it simple, and of course, added in as many good-for-you items as possible. To get started you’ll need the following items.

How to Make Healthy Zucchini Bread

Gone are the days of spending hours in the kitchen laboring over homemade bread! Who has time for that, anyway?! This zucchini bread comes together in minutes with just a few simple steps.

First, preheat the oven to 350 degrees Fahrenheit, and line a loaf pan.

Then, whisk together the flax eggs, 3-4 cups of sugar, vanilla, milk, and coconut oil before adding in the zucchini, and whisk the ingredients again until well-combined.

Fold in the remaining ingredients, reserving 1 teaspoon of cinnamon.

Next, pour the mixed batter into the loaf pan, and sprinkle the remaining ¼ cup sugar and 1 teaspoon of cinnamon on top. Use a knife to swirl the cinnamon sugar mixture into the top layer of the  batter.

Bake the loaf for 55-60 minutes or until a toothpick can be inserted and comes out clean. Let the bread cool, and enjoy!

Why Did My Zucchini Bread Deflate?

If your bread flattens after baking, it could be due to a couple different reasons.

Do I Really Need to Squeeze the Zucchini?

For this vegan recipe, yes, it is crucial to squeeze any excess moisture out of the shredded zucchini. This will prevent the batter from becoming too watery which could lead to it underbaking and falling apart!

Personally, I like the simplicity of this recipe. However, if you want to add a little texture to your dough, try including chocolate chips, chopped nuts, or even dried fruits such as raisins. If you want to get super crazy, you could even add icing on top!

If you plan to eat your zucchini bread right away, store it in an airtight container on the counter for 2-3 days. Or, if you want to make it last a little bit longer, place it in the fridge for 5-6 days.

Can You Freeze Vegan Zucchini Bread?

Yes! To freeze this healthy zucchini bread, place it in an airtight container or a sealable bag, and store it for up to 3 months.

Can I Make Muffins Instead of a Bread Loaf?

Absolutely! Just be sure to reduce the cooking time, and keep a close eye on them to prevent any burning. They should take around 15-20 minutes to bake depending on the size of the muffins and your oven.

I can’t even count how many times I’ve made zucchini bread. It’s just a classic, isn’t it?! I love all of the versions I’ve made equally, but I’m curious. Do you have a favorite? Or, maybe there’s a zucchini bread variation I haven’t tried yet that you think I should? Let me know in the comments below!

Dying to tell everyone you made this recipe and loved it?? Don’t forget to share a picture and tag @thekellykathleen so that I can profess my love to you and re-share it for all to see!

This Cinnamon Sugar Zucchini Bread is made with flax eggs and dairy-free products for a delicious vegan bread!

There may be affiliate links in this post! By purchasing a product I recommend, I may receive a small compensation. Remember peeps- I’m real AF and would only recommend products I absolutely love and use myself. Thank you for supporting me in my realness- you make my LIFE!